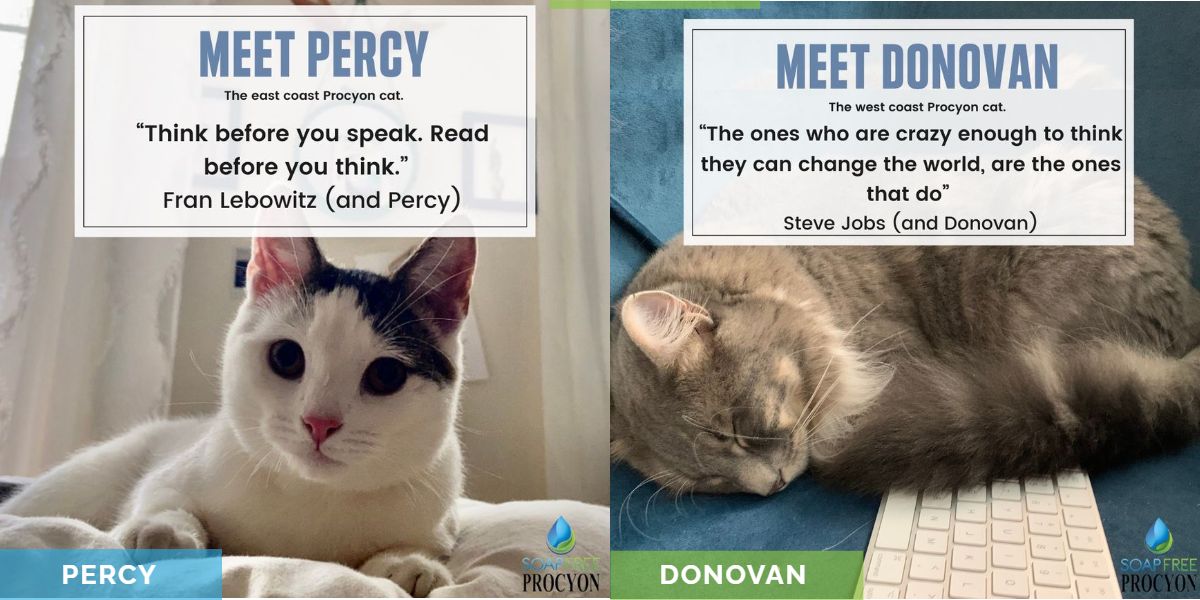 This eternal quote by Charles Dickens, immortalized in A Tale of Two Cities, perfectly encapsulates the longstanding quarrel of two cats from two cities. Procyon is pleased to announce a partnership with two of the internet’s biggest stars – Percy & Donovan. The two green cleaning enthusiasts join the team as our feline influencers, and while they are the newest members of the Procyon family, they have been fans of the pet-safe green cleaning supplies for their entire lives. Donovan and Percy have a healthy rivalry being from opposite coasts, but they both graciously accepted to work with us each Friday to share their #WhiskerWisdom on #FelineFriday. Each week, followers of Procyon’s social media accounts will see them sharing deep philosophical insights, divulging valuable green cleaning knowledge, or simply trash-talking the other cat’s hometown baseball team as the Mariners battle the Yankees for an American League wildcard spot.

A young ruffian from Seattle, Washington, known on the streets as Donovan, and a sophisticated, high-brow socialite from New York, New York, have formed an unlikely alliance driven by their mutual love for the world’s most effective pet-safe products: Soap Free Procyon.

But their union is not without its struggles.

Though they do occasionally pose for photos, Donovan prefers to show his teeth or underbelly – a practice that Percy detests – while Percy much prefers to include a fashionable backdrop in his photos. Their rivalry has only grown as they have become closer through their preferred green cleaning products, and they have not even discussed the matter of 90’s hip-hop. Sailors will be seeing red skies in the morning for months to come as the two felines ensure the waters ahead are choppy.

They both agree on this: Nothing in the world of green cleaning solutions can effectively clean these cat’s infrequent and unintentional messes like Soap Free Procyon can. Furthermore, they agree that your time is most likely not valuable enough to avoid taking a few minutes to view Donovan and Percy every Friday for their Whisker Wisdom on Feline Friday.

That’s right, Donovan and Percy overcome their differences each Friday and provide timeless, deep insights into the world we all live in along with a photo to match their moods. It’s the perfect way to cap off your week regardless of whether it was a good or a bad one. Donovan and Percy fail to disappoint. Find them on the Soap Free Procyon Facebook or Instagram.